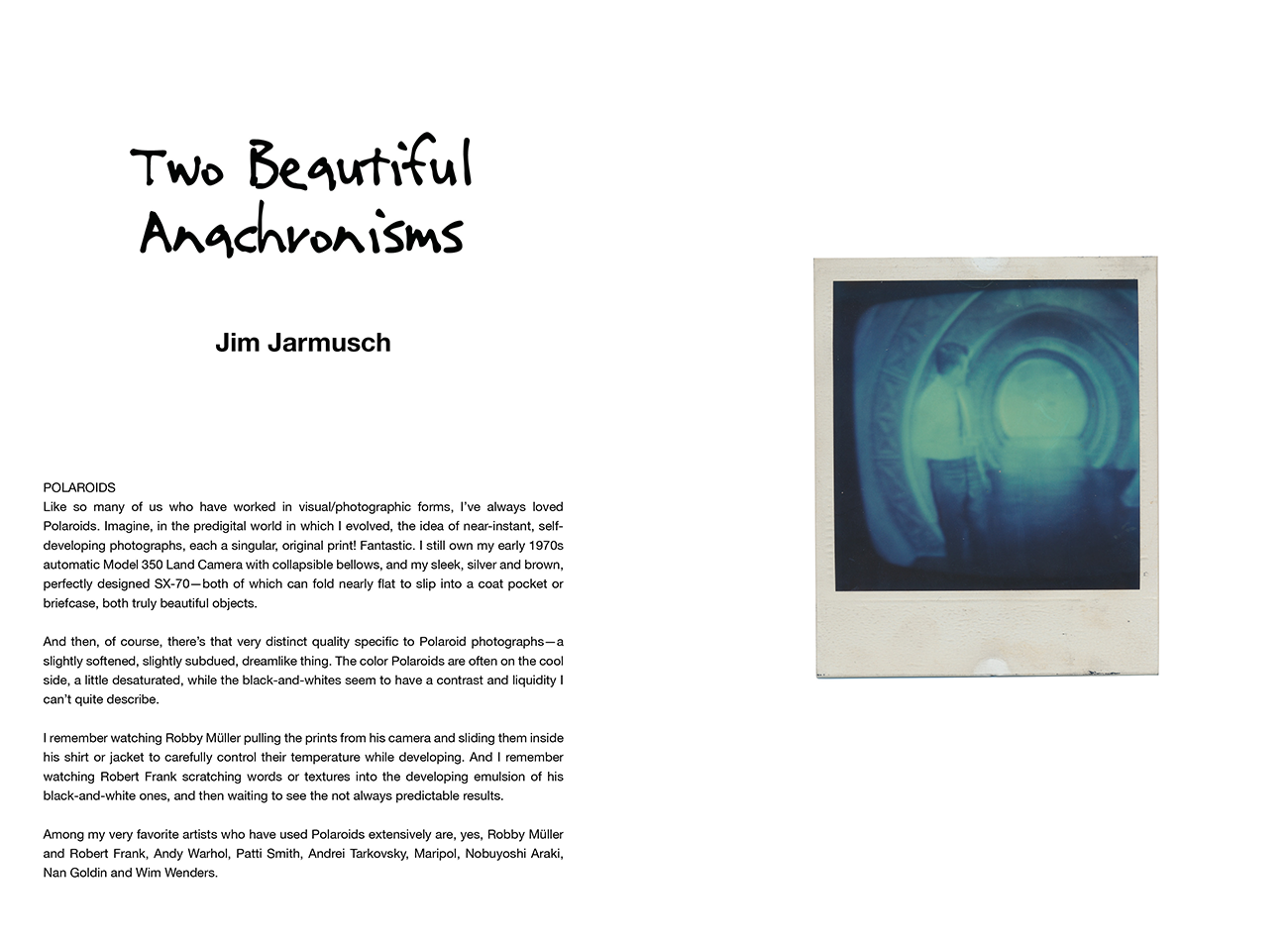 POLAROIDS
Like so many of us who have worked in visual/photographic forms, I’ve always loved Polaroids. Imagine, in the predigital world in which I evolved, the idea of near-instant, self-developing photographs, each a singular, original print! Fantastic. I still own my early 1970s automatic Model 350 Land Camera with collapsible bellows, and my sleek, silver and brown, perfectly designed SX-70—both of which can fold nearly flat to slip into a coat pocket or briefcase, both truly beautiful objects.

And then, of course, there’s that very distinct quality specific to Polaroid photographs—a slightly softened, slightly subdued, dreamlike thing. The color Polaroids are often on the cool side, a little desaturated, while the black-and-whites seem to have a contrast and liquidity I can’t quite describe.

I remember watching Robby Müller pulling the prints from his camera and sliding them inside his shirt or jacket to carefully control their temperature while developing. And I remember watching Robert Frank scratching words or textures into the developing emulsion of his black-and-white ones, and then waiting to see the not always predictable results.

CRT TVs
Now also an anachronism (and discarded and unwieldly technology) is the cathode-ray tube television, omnipresent in at least the first half of my existence. Throughout those decades, CRT TV screens were lenses ceaselessly streaming images into living rooms, bedrooms, motel rooms, bars, airports, storefronts—and into the world’s collective consciousness.

A cathode-ray tube is poetically described (for me, at least) as “a glass envelope which is deep, heavy and fragile” and facilitates “the free flight of electrons . . . to the tube’s face without scattering due to collisions with air molecules.” It is essentially “a vacuum tube containing electron guns, the beams of which are manipulated to display images on a phosphorescent screen.” Besides television sets, CRTs have also been employed in oscilloscopes, radar targets and various other devices. Even into the mid-1990s, more than 150 million CRT TVs were manufactured, but only a decade later, they had been almost universally displaced by flat panel LCD monitors, rendering them a nearly dead technology (though still sometimes used in instrument displays in the airline industry).

In our family home when I was growing up, we only had a black-and-white CRT TV, my father being suspicious of the “new color technology” and concerned that the radiation emitted might have possible ill effects on our health. As a result, I saw color films only in movie theaters until, in my early twenties, after I had moved to New York City, I eventually purchased a very small (twelve-inch) Sony Trinitron on Canal Street—the best I could afford at the time. The first surprising image I recall was the bright, multicolored curtains behind Johnny Carson during the opening stand-up routine on The Tonight Show! Next, I was mesmerized by the realization that shows like Mission: Impossible, Bonanza and even Dragnet had actually been originally filmed in color!

Now, as I look back through my archive of more than fifty years of personal photographs and Polaroids, the frequency of CRT TV screens recurring throughout is striking. Even the shapes, sizes and designs of the TV sets themselves interest me, and the rephotographed images on their illuminated screens now somehow seem as soft, elusive and dreamlike as all those original, now evocatively fading Polaroids . . .