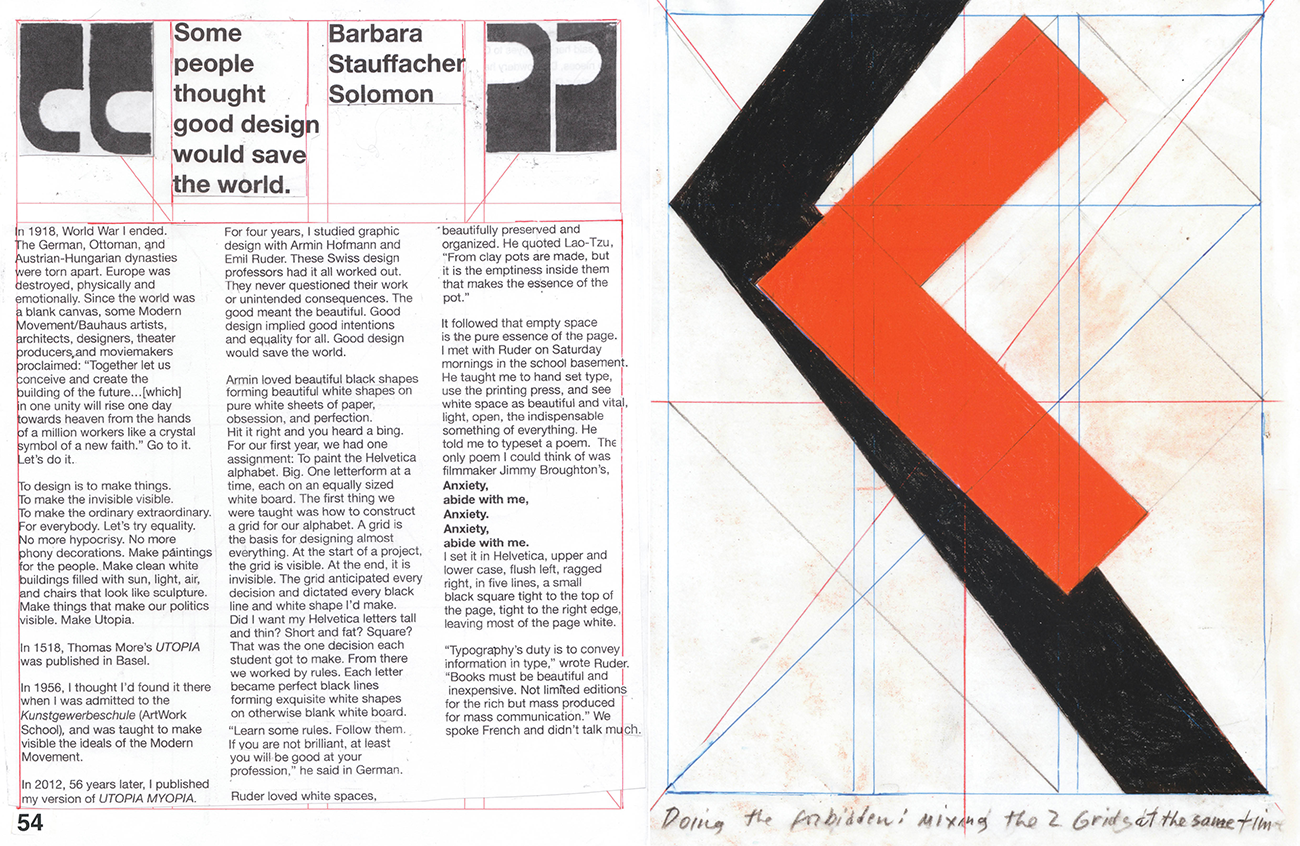 Some people thought good design would save the world.

In 1918, Word War I ended. The German, Ottoman, and Austrian-Hungarian dynasties were torn apart. Europe was destroyed, physically and emotionally. Since the world was a blank canvas, some Modern Movement / Bauhaus artists, architects, designers, theater producers, and moviemakers proclaimed: “Together let us conceive and create the building of the future . . . [which] in one unity will rise one day toward heaven from the hands of a million workers like a crystal symbol of a new faith.” Go to it. Let’s do it.

To design is to make things. To make the invisible visible. To make the ordinary extraordinary. For everybody. Let’s try equality. No more hypocrisy. No more phony decorations. Make paintings for the people. Make clean, white buildings filled with sun, light, air, and chairs that look like sculpture. Make things that make our politics visible. Make Utopia.

In 1518, Thomas More’s UTOPIA was published in Basel.

In 1956, I thought I’d found it there when I was admitted to the Kunstgewerbeschule (ArtWork School), and was taught to make visible the ideals of the Modern Movement.

In 2012, fifty-six years later, I published my version of UTOPIA MYOPIA.

For four years, I studied graphic design with Armin Hofmann and Emil Ruder. These Swiss design professors had it all worked out. They never questioned their work or unintended consequences. The good meant the beautiful. Good design implied good intentions and equality for all. Good design would save the world.

Armin loved beautiful black shapes forming beautiful white shapes on pure white sheets of paper, obsession, and perfection. Hit it right and you heard a bing. For our first year, we had one assignment: To paint the Helvetica alphabet. Big. One letterform at a time, each on an equal-size whiteboard. The first thing we were taught was how to construct a grid for our alphabet. A grid is the basis for designing almost everything. At the start of a project, the grid is visible. At the end, it is invisible. The grid anticipated every decision and dictated every black line and white shape I’d make. Did I want my Helvetica letters tall and thin? Short and fat? Square? That was the one decision each student got to make. From there, we worked by rules. Each letter became perfect black lines forming exquisite white shapes on otherwise blank whiteboard. “Learn some rules. Follow them. If you are not brilliant, at least you will be good at your profession,” he said in German.

Ruder loved white spaces, beautifully preserved and organized. He quoted Lao-Tzu: “From clay, pots are made, but it is the emptiness inside them that makes the essence of the pot.”

It followed that empty space is the pure essence of the page. I met with Ruder on Saturday mornings in the school basement. He taught me to hand-set type, use the printing press, and see white space as beautiful and vital, light, open, the indispensable something of everything. He told me to typeset a poem. The only poem I could think of was filmmaker Jimmy Broughton’s:

I set it in Helvetica, upper- and lowercase, flush left, ragged right, in five lines, a small, black square tight to the top of the page, tight to the right edge, leaving most of the page white.

“Typography’s duty is to convey information in type,” wrote Ruder. “Books must be beautiful and inexpensive. Not limited editions for the rich but mass-produced communication.” We spoke French and didn’t talk much.